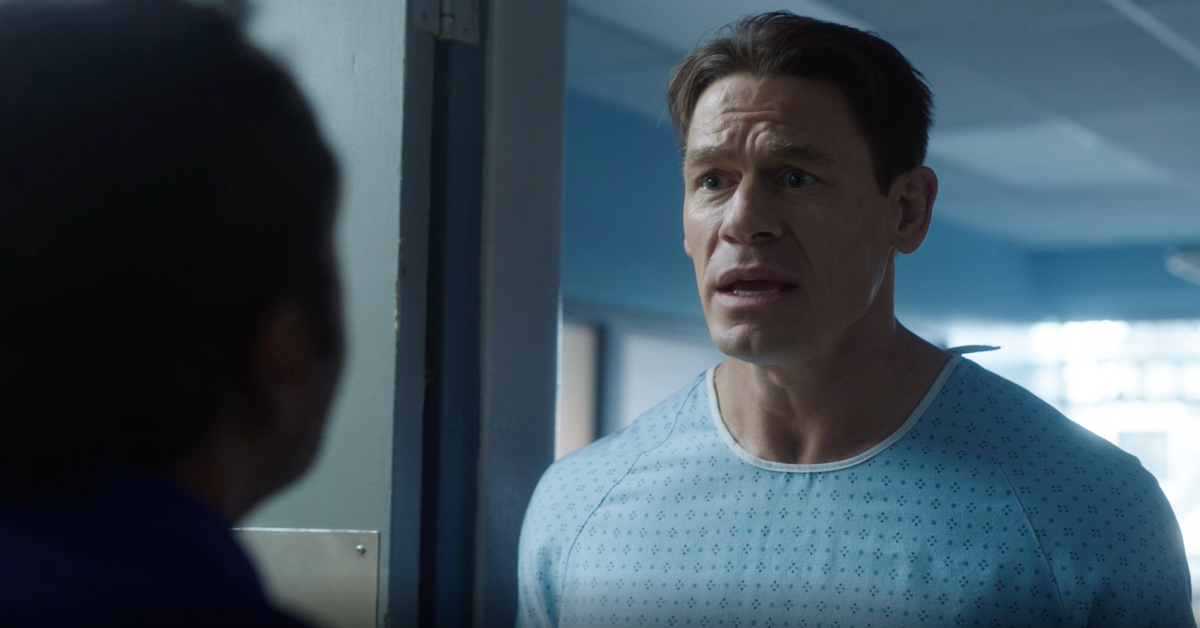 Christopher Smith (John Cena) is famous as f*** in a profanity-filled clip from HBO Max’s Peacemaker. Spinning out of James Gunn’s The Suicide Squad, where the toilet seat-helmeted Peacemaker turns on Task Force X before he’s left comatose but alive in a post-credits scene, Peacemaker picks up where Squad left off: with the self-righteous douchebag recruited by Amanda Waller (Viola Davis) to “save the f***ing world.” In a clip released online during San Diego Comic-Con Special Edition, Peacemaker gets into a war of words with janitor Jamil (Rizwan Manji) and fires a shot at Jason Momoa‘s aquatic Justice Leaguer: “F*** Aquaman!”

Watch the NSFW clip above before HBO Max’s Peacemaker premieres its full trailer on December 3.

“Truth is, I’m supposed to be in prison for superhero sh*t,” Peacemaker says from his hospital room after surviving a bullet fired by Bloodsport (Idris Elba) and being buried beneath the rubble of a destroyed Jotunheim in The Suicide Squad. Told he’s “kind of bulky to be a superhero,” Peacemaker insists he’s “f*ckin’ famous.”

“Not that famous,” scoffs Jamil. “Aquaman, he’s famous.” After hurling a curse towards the king of Atlantis, Peacemaker admits he was in prison for “integrity.”

“I made a vow to have peace,” Peacemaker says, “no matter how many people I have to kill to get it.”

The spinoff series premiering January 13 on HBO Max is part prequel and part sequel to The Suicide Squad, unmasking the born killer and weapons expert as Peacemaker reveals “where he came from, what he’s done, what that means to him, and where he’s going after all of this.”

“Through the story, you learn where Peacemaker came from,” Gunn previously told Variety about Peacemaker‘s place in the DC Extended Universe’s timeline. “There’s a moment in [The Suicide Squad] where Bloodsport talks about his father and what his father was like, and you cut to a shot of Peacemaker, and Peacemaker nods. That’s the seed of the entire Peacemaker series.”

The son of Auggie Smith (Scorpion‘s Robert Patrick), Christopher Smith is “not an evil person, he’s just a bad guy,” Gunn said. “He seems sort of irredeemable in the film. But I think that there’s more to him. We didn’t get a chance to know him [in The Suicide Squad] in the way we get to know some of the other characters. And so that’s what the whole show is about. I needed eight episodes to do it, at least.”