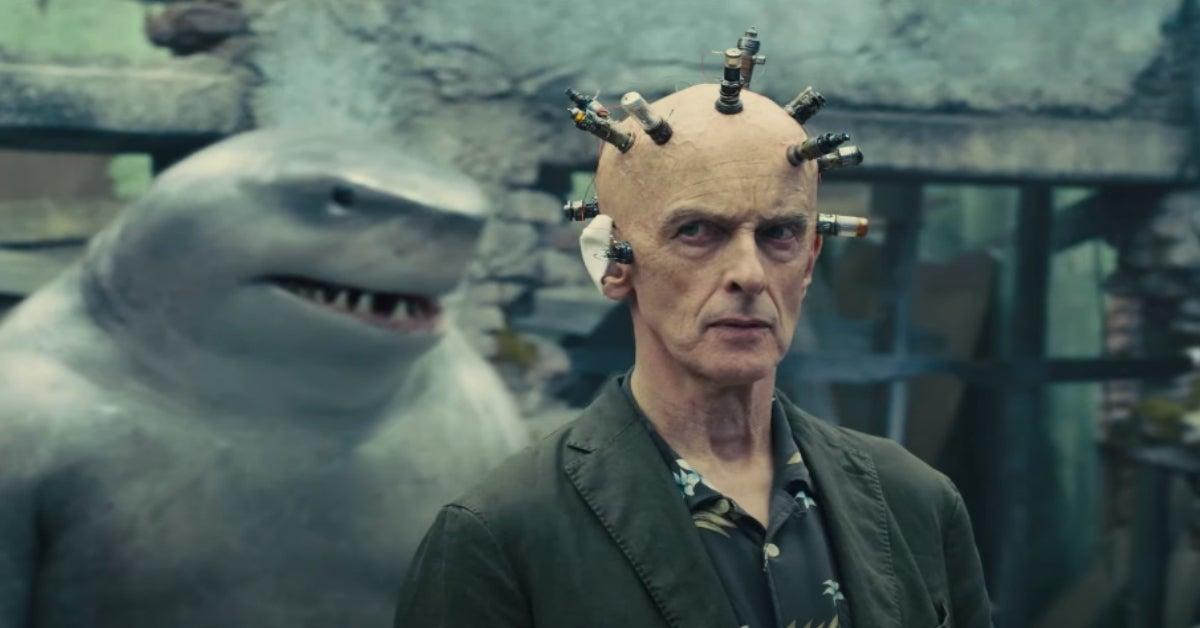 Peter Capaldi’s role as The Thinker was one of the more surprising elements of The Suicide Squad. The Doctor Who star looked like he spent more time in hair and makeup than he did in the movie, with only a few scenes but one of the most bizarre and distinctive looks in the whole movie. That look apparently evolved over time somewhat, and yesterday, filmmaker James Gunn shared a photo from production that shows a slightly different take on The Thinker’s “upgrades” — the circuits, tubes, and knobs that protrude from his head in the film, in spired by his look from the comics.

Capaldi plays a new version of the character in the film, Gaius Grieves, whose appearance is similar to that from the comics but whose secret identity is different. He also is not nearly as powerful as The Thinker was presented in the comics or on The Flash TV show.

You can see the image shared by Gunn below.

First screen test of #PeterCapaldi as #TheThinker, Gaius Grieves. The careful observer will notice that the wires & the size & shape of some of Thinker’s “upgrades” are different from our final version in #TheSuicideSquad. @SuicideSquadWB pic.twitter.com/6cJXqiUp1F

In The Suicide Squad, welcome to hell — a.k.a. Bell Reve, the prison with the highest mortality rate in the US of A. Where the worst Super-Villains are kept and where they will do anything to get out — even join the super-secret, super-shady Task Force X. Today’s do-or-die assignment? Assemble a collection of cons, including Bloodsport, Peacemaker, Captain Boomerang, Ratcatcher 2, Savant, King Shark, Blackguard, Javelin, and everyone’s favorite psycho, Harley Quinn. Then arm them heavily and drop them (literally) on the remote, enemy-infused island of Corto Maltese.The Suicide Squad‘s cast includes Viola Davis as Amanda Waller, Margot Robbie as Harley Quinn, Idris Elba as Bloodsport, Jai Courtney as Captain Boomerang, Joel Kinnaman as Rick Flagg, David Dastmalchian as Polka-Dot Man, Steve Agee as John Economos and King Shark (on-set reference), Sylvester Stallone as the voice of King Shark, Daniela Melchior as Ratcatcher 2, John Cena as Peacemaker, Michael Rooker as Savant, Flula Borg as Javelin, Peter Capaldi as Thinker, Nathan Fillion as TDK, Mayling Ng as Mongal, Pete Davidson as Blackguard, Sean Gunn as Weasel, Joaquin Cosio as General Mateo Suarez, Juan Diego Botto as Luna, Storm Reid as Tyla, Alice Braga as Sol Soria, Jennifer Holland as Emilia Harcourt, and Taika Waititi as Ratcatcher.

The Suicide Squad is being released on Blu-ray and DVD on October 26th. Peacemaker is expected to debut on the streaming service sometime this year.