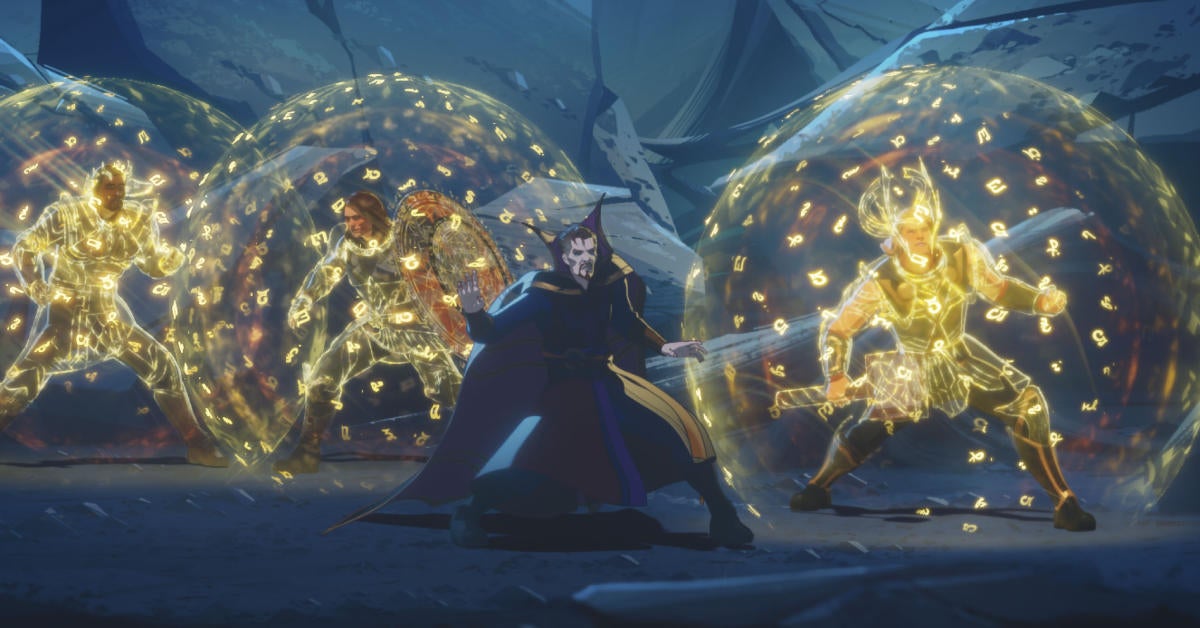 On Wednesday, Marvel fans got to experience the Season 1 finale of What If…?, which served as a culmination of the Marvel Cinematic Universe‘s ambitious first animated chapter. The episode found a way to reunite nearly all of the key concepts of Season 1’s episodes (as well as some stories yet to be told), in the effort of assembling the “Guardians of the Multiverse” to fight against Ultron (Ross Marquand). The episode culminated in an impressive fight sequence, which used the series’ distinct animated style to create some visuals that feel distinct from what fans expect of the live-action MCU. In an exclusive interview with ComicBook.com shortly after the season finale, What If…? director and executive producer Bryan Andrews revealed the pieces of pop culture that inspired that third-act fight.

“I think the material spoke for itself, and we were just trying our best to give it what it needed to be,” Andrews explained, before adding, “Actually I lied. I’ll say this, there’s a couple things. Our awesome production designer Paul Lasaine, he worked on Prince of Egypt back in the day and he was one of the guys who helped design the “Angel of Death” sequence, when the hand of God comes through and takes the first born children. It had a very stark look, it was very monochromatic and very stripped down. I’ve always been looking for an opportunity to do something in that vein, and when it came to this, when Ultron was zeroed in on Strange and realized, ‘Okay, I’m going to do my ultimate death spell, where I’m just hitting you with so much different Infinity things.’ It strips color away, in a way. So we got to use that, and since Paul Lasaine is our guy, and he’s the one who did it, he’s just like, ‘Yeah, I’m bringing back the thing I did on the thing.’ I’m like, ‘That’s right, man!'”

“And then the other thing was Sleeping Beauty, actually,” Andrews continued. “Disney’s Sleeping Beauty, when Maleficent turns into the dragon. There’s a moment when Prince Phillip looks up. Oh my God, [Walt] Disney loves it. He also did the same thing in Cinderella, when the evil stepmother realized that Cinderella was the one at the ball. They do this thing — and it’s an old school technique from way back in the day, the silent era and the early thirties — where everything gets dark, everyone turns into a silhouette almost, but the room stays bright. Some sort of juxtaposition of the lighting. A lighting change. So I wanted to do that to show tremendous power, because it worked so well back in the old days. So, some of the old tricks, I brought in and used visually.”

“But when it comes to the composition of that stuff, that’s just us,” Andrews continued. “And I think for the final battle, I also got my older brother Mark, who basically boarded a ton of The Incredibles, had a story in Incredibles, all this other stuff. So he came up with some cool stuff as well. It was fun to work with my bro again, ever so briefly, on this episode.”

What If…? executive producer Brad Winderbaum previously spoke to ComicBook.com about the “freedom” that results from moving the storytelling of the MCU into animation.

“I mean, you’re completely unbounded from any sort of rules, which is both the most exciting and the most daunting thing about it, because then you have to create your own rules,” Winderbaum explained to ComicBook.com earlier this year. “But I mean, it really is, in many ways, the purest interpretation of the imagination of the people behind it. There’s an element of chaos in all things. There’s an element of chaos in animation. Certainly a major factor in live action. Filmmaking is chaos. And how things don’t go as planned and how you end up ultimately with a whole different set of tools than you thought you had going in. In an animation, kind of get to work with this infinite canvas where anything you want can be achieved. And if you can conceive it, you can do it. If you can dream it, you can do it.”

Season 1 of What If…? is now available to stream in its entirety on Disney+.